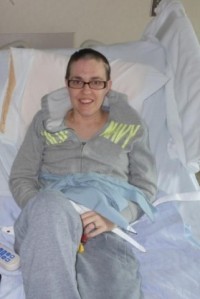 People have asked about pictures. This is pretty much the only one I have of me, taken by a friend I no longer have. I believe this was early June, so I have gone past this point in the story. You can see my Swedish restraint belt extending to the sides of the bed. The stylish blue fabric tied around me is a gait belt and something I had forgotten about until I uploaded this picture. It was for the nurses and therapists to grab as they transferred me to and from the bed/toilet/wheelchair. I wasn’t walking when this was taken, but once I started to, the therapists could use the gait belt to hold onto me.

Within a day or so of starting to walk, my PT Cheryl had me fitted for an AFO like this one:

It fits under the insole of a shoe and helps to keep the ankle from rolling and the toes from curling under. I know now that I had developed something called Foot Drop as a result of the stroke. In Rehab, they made me wear this giant horrible boot thing while I slept “because you don’t want to get Foot Drop.” Too late. I wish they would have just told me that I already had it, that it was pretty much inevitable, so I could have gotten some decent sleep. I’m not sure there was any way it could have been prevented. Now that I have more connections in the Stroke Survivor community, I understand just how common this side effect is. We all have it to some degree. I still have it (will always have it), although I no longer wear the brace. It flares in cold, damp weather and I call it my “old man leg.”

Another accomplishment took place on June 14, 2012. I was taken off of “bladder protocol” after almost two weeks on Urecholine and large amounts of coffee from Allanya. That means I had gone 48 hours without being cathed. Woo hoo! I could now ignore the home catheter kit commercials on CNN, but I tell you, having been a hair’s breadth away from needing them, I will NEVER be able to ignore home catheter kit commercials. I saw that damn bladder scanner occasionally in the hallway parked outside of someone else’s room. It was all I could do not to kick the thing down the hallway.

Meanwhile, Matt was juggling the house (still on the market) and the kids. He was back teaching two evenings a week while a sitter came and dropping the kids with whatever mom would have them during the days, so that he could be with me at the hospital. The therapists had stressed the importance of him being around as much as possible for the last week, so that they could train him to take care of me. Because I needed to be taken care of. Because, despite being walking with a fully functioning bladder, I was still broken. They were starting to list the equipment that would be needed when he brought me home, so that he could get it together. I needed a special chair for the toilet. I needed a bench for the shower. To test our readiness for my upcoming release, we asked Dr. R to let me have a day pass for the Sunday before my release.

And because all of this wasn’t quite enough chaos for us, my husband was also still entertaining my constant requests for a dog. Now that I was fully aware of where Riverside Hospital was located, I was no longer asking Matt to “run across the street” and get me a dog from the shelter. We did spend a lot of time looking at shelter dog profiles online together, trying to decide which one would be the best fit for our family.

Something changed about halfway through Rehab. I can’t remember if I had a dream about my childhood dog Bart and told Matt about it or if we were just talking about our childhood dogs, but I suddenly and desperately wanted a Westie (West Highland White Terrier) like the dog I grew up with. Matt also grew up with terriers, although our first dog together had been our beloved rescue greyhound Gavin. We both became enchanted with the idea of having a terrier again (even though they are brats!) Next thing I know, Matt had contacted a breeder and, lo and behold, she had a new litter, but the puppies were all spoken for. Except one male, for whom she still waiting for a return call after their initial inquiry and deposit. Matt and I decided that if this puppy was available, then we would take him. If not, we would go back to the shelter plan.

I swear on my children that Matt and I told NOBODY about our dog plan, but like a high school hallway, everyone on the ward knew we were talking about a new puppy within a few hours. I blame my constantly open door. Every nurse greeted me with “hear you’re getting a dog.” My OT Jenny all but staged an Intervention where she sat us down and told us in no uncertain terms what a terrible idea getting a dog was.

It was. It really was. It was a terrible idea and terrible timing. Just getting out of the hospital with three small kids and a house on the market, a puppy was the last thing we needed. I had been hearing and heeding medical and professional advice for weeks now, so I took Jenny’s sage advice.

And promptly ignored it. The breeder called a few days later. The puppy was available and would be ready for adoption in late July. That would give me a month at home before we got our new addition. Surely, I’ll be mostly recovered by then? No. I wouldn’t be. Choosing to get that damn puppy was a completely irresponsible decision. And one of the best ones we’ve ever made. It made the Summer of 2012 The Summer We Got Duncan instead of The Summer Mom Was Sick. 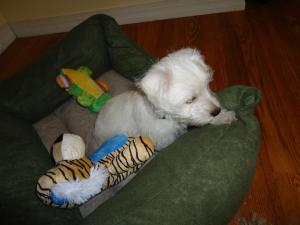 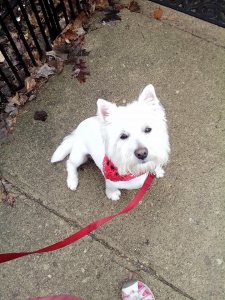 4 thoughts on “A terrible idea”